Electroencephalography (EEG) is an electrophysiological monitoring method to record electrical activity of the brain. It is typically noninvasive, with the electrodes placed along the scalp, although invasive electrodes are sometimes used in specific applications. EEG measures voltage fluctuations resulting from ionic current within the neurons of the brain.In clinical contexts, EEG refers to the recording of the brain’s spontaneous electrical activity over a period of time, as recorded from multiple electrodes placed on the scalp. Diagnostic applications generally focus on the spectral content of EEG, that is, the type of neural oscillations (popularly called “brain waves”) that can be observed in EEG signals. EEG is most often used to diagnose epilepsy, which causes abnormalities in EEG readings.It is also used to diagnose sleep disorders, coma, encephalopathies, and brain death. EEG used to be a first-line method of diagnosis for tumors, stroke and other focal brain disorders,but this use has decreased with the advent of high-resolution anatomical imaging techniques such as magnetic resonance imaging (MRI) and computed tomography (CT). Despite limited spatial resolution, EEG continues to be a valuable tool for research and diagnosis, especially when millisecond-range temporal resolution (not possible with CT or MRI) is required. 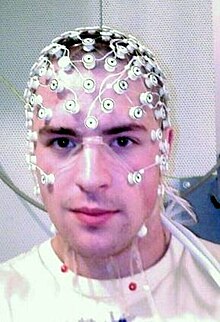 At times, a routine EEG is not sufficient, particularly when it is necessary to record a patient while he/she is having a seizure. In this case, the patient may be admitted to the hospital for days or even weeks, while EEG is constantly being recorded (along with time-synchronized video and audio recording). A recording of an actual seizure (i.e., an ictal recording, rather than an inter-ictal recording of a possibly epileptic patient at some period between seizures) can give significantly better information about whether or not a spell is an epileptic seizure and the focus in the brain from which the seizure activity emanates.

Additionally, EEG may be used to monitor certain procedures:

EEG can also be used in intensive care units for brain function monitoring:

If a patient with epilepsy is being considered for resective surgery, it is often necessary to localize the focus (source) of the epileptic brain activity with a resolution greater than what is provided by scalp EEG. This is because the cerebrospinal fluid, skull and scalp smear the electrical potentials recorded by scalp EEG. In these cases, neurosurgeons typically implant strips and grids of electrodes (or penetrating depth electrodes) under the dura mater, through either a craniotomy or a burr hole. The recording of these signals is referred to as electrocorticography (ECoG), subdural EEG (sdEEG) or intracranial EEG (icEEG)–all terms for the same thing. The signal recorded from ECoG is on a different scale of activity than the brain activity recorded from scalp EEG. Low voltage, high frequency components that cannot be seen easily (or at all) in scalp EEG can be seen clearly in ECoG. Further, smaller electrodes (which cover a smaller parcel of brain surface) allow even lower voltage, faster components of brain activity to be seen. Some clinical sites record from penetrating microelectrodes. EEG may be done in all pediatric patients presenting with first onset afebrile or complex febrile seizures.EEG is not indicated for diagnosing headache. Recurring headache is a common pain problem, and this procedure is sometimes used in a search for a diagnosis, but it has no advantage over routine clinical evaluation.